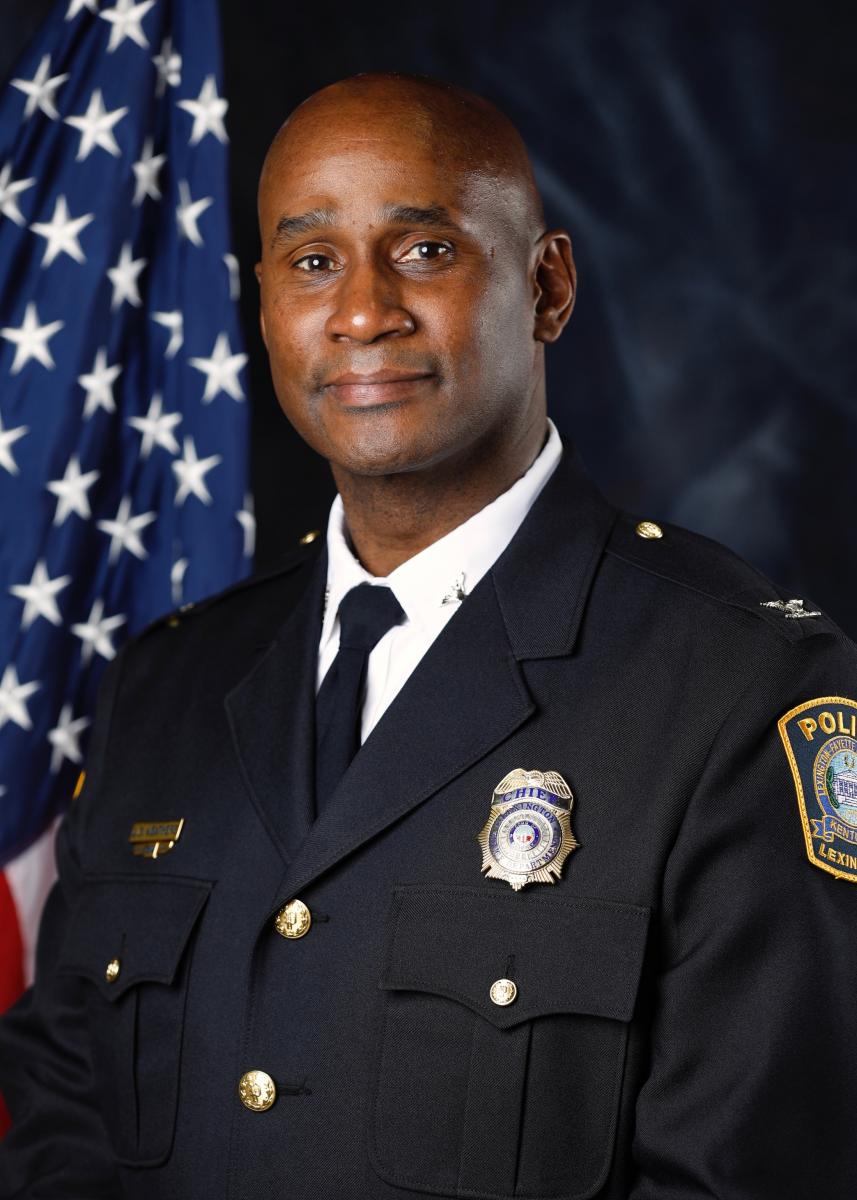 Lawrence Weathers was sworn in as Chief of Police on March 4, 2018. Weathers and his nine brothers and sisters grew up in Lexington’s Bluegrass Aspendale and Hollow Creek neighborhoods. He holds a Bachelor's degree from the University of Kentucky and earned a Master's in criminal justice from Eastern Kentucky University.

Weathers was hired by the Lexington Police Department in 1989. During the first six years of his career Weathers worked as a Patrol officer and was assigned to the D.A.R.E. (Drug Abuse Resistance Education) program, teaching elementary and middle school students how to avoid and resist the temptations that lead to drug abuse. In 1994 he was transferred to the Bureau of Investigations and assigned as a narcotics detective.

Weathers was promoted to Sergeant in 1997 and has worked as a supervisor in every bureau within the Lexington Police Department. In 2001 he returned to the Narcotics Enforcement Unit as a Lieutenant.  In 2008 his assignment shifted to the Chief’s office as the commanding supervisor of the Internal Affairs Section, where he was responsible for investigating, tracking, and managing complaints against department officers. A year later Weathers was promoted to the rank of Commander and assigned to the Bureau of Patrol. In March 2011 Commander Weathers was reassigned to the Training Section. With his appointment to Assistant Chief in 2014, Weathers led the Bureau of Special Operations until his retirement from Lexington Police in 2016.

In July 2016 Weathers was selected as the Director of Law Enforcement for Fayette County Public Schools. As the Director of Law Enforcement he was responsible for the safety and security of more than 40,000 students, staff, and visitors, as well as dozens of school district properties. As Director, he was oversaw 34 sworn officers, supervisors, and seven civilian staff members. Under Weathers’ leadership FCPS Law Enforcement increased its number of officers, improved its training requirements, and updated several policies and procedures.

When announcing his return to the police department, Mayor Gray noted Weathers’ commitment to community policing and how well respected he is throughout Lexington.

Weathers is a member of the National Organization of Black Law Enforcement Executives (NOBLE) and the International Association of Chiefs of Police (IACP). He volunteers as a member of “Drug Free Lex” (formerly the Mayor’s Alliance) which is part of the Kentucky Alliance for Substance Abuse Policy. He also served on the board of the Downtown Lexington Corporation and has served on committees responsible for addressing youth violence and homelessness in Lexington. Chief Weathers also volunteers his time as a mentor to elementary school students, and by educating parents and youth about the effects of illicit drugs and violence.

Core values of the department

Leadership
The value of leadership within the agency is underscored by providing an organizational climate that encourages learning opportunities for our employees.

Customer Service
Effective customer service is reflected in the positive manner in which we address community needs. We focus on exemplary service, which enhances the quality of life for citizens and visitors.

Employee Satisfaction
The emphasis on maintaining a quality work environment for our employees encourages the delivery of quality service to the citizens of Lexington.

Efficiency
The utilization of technology, human resources, diverse groups, and individuals increases the efficiency of the Division to respond to the dynamic needs of the community.

Community Partnerships
The Division encourages community partnerships via outreach. This creates positive relationships and opportunities to benefit the community.