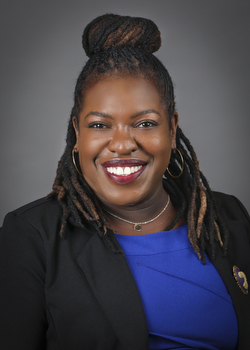 Councilwoman Denise Gray was elected to represent the residents of the 6th District in November of 2022.

Upon returning to Lexington, she sought to further her impact on our community and shifted her career to education. She started working with Fayette County Public Schools, helping Booker T. Washington Intermediate Academy students, Harrison Elementary, Crawford Middle, and Bryan Station High Schools.

As a testament to Denise’s dedication to public service, and her commitment to her community, she has held several digital town hall nonpartisan conversations to address the “Hard Issues.” Her “Addressing the Elephant in the Room: Race” town hall, which addressed policing, and other issues, was covered by the media around the Commonwealth. “Kentucky Conversations with Denise Gray” focused on the lives of our fellow Kentuckians.

Denise has served on numerous boards, but her most valued position has been as a board member of the Autism Society Bluegrass.

The sixth district is a wonderful place to live, work and play! This diverse district is home to 17 neighborhood associations, nine public schools, and seven city parks, including the Brighton Rail Trail, a shared-use trail from Man O War Blvd, connecting to Pleasant Ridge Park and Polo Club Boulevard. Also, the bustling Hamburg Pavilion draws thousands of residents from across Lexington and neighboring counties for business and pleasure.

The sixth District also has a rich cultural history. Notable historic sites include the horseshoe-shaped Hamburg Place Horse Cemetery, one of Hamburg’s loveliest green spaces, which houses the remains of some of racing’s most famous thoroughbreds and several Kentucky Derby winners. Cadentown School, a segregated county school located on Liberty Road at Todds Road, was established in 1873 and closed after the Second World War. It later served as a settlement for freed slaves after the Civil War. Additionally, the namesake of the Bryan Station neighborhood and schools, Bryan’s Station was a frontier fort that came under a combined Native American, Tory and Canadian Ranger attack in 1782.

The major corridors in the 6th District are Paris Pike, Winchester, Liberty and Bryan Station roads.