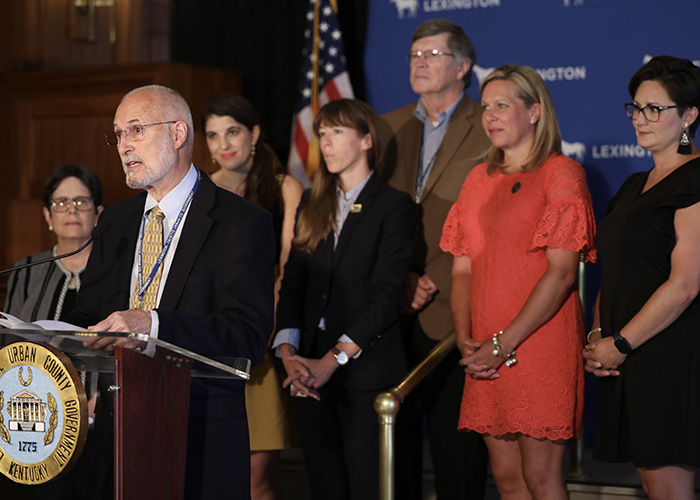 Council, Mayor and community work together on plan for federal funds

Lexington has once-in-a-lifetime opportunities in the $120 million the City is receiving from the federal government through the American Rescue Plan Act. Mayor Linda Gorton, Vice Mayor Steve Kay and the members of the Urban County Council are determined to make the most of it, starting with looking to the community to provide ideas on how the funds are used.

“The Council and administration have worked together for weeks, crafting a transparent process that starts with extensive public input through an on-line survey, public meetings and appearances at neighborhood gatherings,” Gorton said. The Mayor and Vice Mayor led a news conference today with most councilmembers also in attendance.

Kay said the Mayor and Councilmembers want a process that produces the full range of possible projects. “We expect many worthwhile projects to be proposed. We want to be able to compare and evaluate those ideas,” Kay said. “We are looking for projects that are transformative and sustainable.”

Gorton praised the process of the Council and her administration working together. “There are plenty of cities where this kind of cooperation doesn’t exist in government,” Gorton said. “But that’s not how we do things in Lexington. We work together, and start by asking the people who live here.”

The Mayor plans to hold public hearings and town halls during the weeks of July 26, August 2 and August 9. There will be additional opportunities for public input as the decision-making process moves forward.

To inform the community, and to focus the community conversation, the Council and Mayor have worked together on a description of categories for possible projects and set of priorities and principles for funding. These are posted on the City’s American Rescue Plan Act website, which will also be live at 2 p.m. today.

All projects would also have to meet federal requirements.

Citizens who have a project they would like to submit for consideration can enter them here.