The city has a comprehensive snow and ice plan designed to keep winter road and walk ways safe.

For the most up-to-date information on snow and ice removal during a winter weather event, watch the local news, visit the snow updates page, or follow the city on Facebook and Twitter.

During peak travel hours, the Traffic Management Center will provide current information on road conditions and traffic flow through the Real-Time Traffic Ticker and the LexWreck Twitter feed. A live video feed of key intersections is available 24/7.

Questions and comments about snow and ice removal should be directed to LexCall at 311 or (859) 425-2255. LexCall hours are 8 a.m. to 6 p.m., Monday through Friday. LexCall will open 24-hours when there is a full mobilization of the snow removal team. You can submit a service request online or using the mobile app anytime.

Prioritization of roads for snow and ice removal is based on traffic volume with consideration for access to public transportation, emergency services, and schools.

Streets and Roads will pretreat roads and strategically position plows when a snow or ice event is anticipated. When plows mobilize, ranked streets will be cleared within 24-hours of the end of the snow event. In ongoing snow events or when snow is drifting, plows may need to revisit higher ranked streets to keep them clear. This may mean a delay in plowing lower ranked roads. Only ranked roads will be plowed in a typical snow event. Additional roads may be added for snow events of 5” or greater. These additional roads will be prioritized with the goal of maximizing access to school, work and services for the greatest number of citizens.

Workers can plow more quickly when there are fewer obstacles to navigate. Help us serve you faster by keeping the ranked roads clear of cars.

Vehicles stalled or disabled on the normally traveled portion of any public roadway may be removed to facilitate snow removal and traffic flow. Additionally, vehicles parked along snow emergency routes may be removed if the Mayor declares a snow emergency. Car owners can retrieve their cars by calling the Police reports desk at 258-3563.

Residents and businesses are responsible for clearing the sidewalks adjacent to their property. Sidewalk clearing is required per city ordinance when more than four inches has fallen and your street has been plowed. Please help keep Lexington moving by clearing your sidewalk regularly, and by helping your neighbors who are unable to clear their own sidewalk.

The City has a plan for clearing city-managed sidewalks. Prioritization of sidewalks for snow and ice removal is based on volume of pedestrian traffic with consideration for access to public transportation, emergency services, and schools.

There are simple actions you can take to help the city keep vehicles and people moving in a snow or ice event.

Why do you put snow in my driveway?
This is not done intentionally. Snow pushed into driveways is an unfortunate result of plowing a street. We know that it is frustrating to have to shovel out the end of your driveway a second time, but it is unavoidable. To avoid extra shovel work, try to shovel after the snow plow has driven by, and shovel the snow to the right side of your driveway as you face the road. See diagram below. 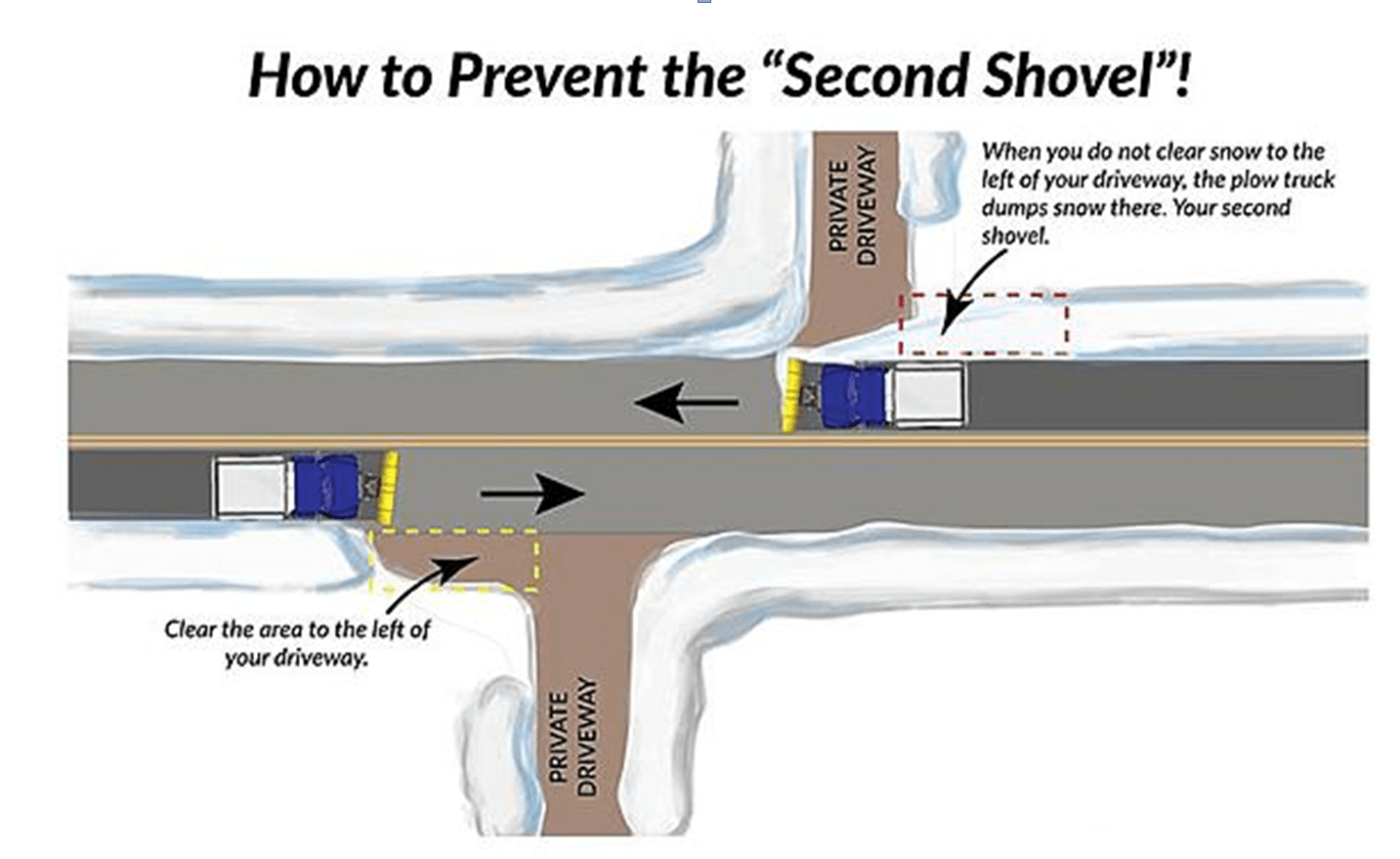 Where do I put my refuse carts when snow is piled at the edge of the street?
Carts should be placed in your driveway opening or an area cleared of snow between the sidewalk and street.