The Lexington Police is accepting applications for police recruits.

After submitting your application, register for the written exam at the link below.

Fill out the online application

Prepare to set the standard with the Lexington Police Department by attending our free prep course. The hiring prep course is a free, optional event hosted by the Lexington Police Recruiting Coordinator to provide detailed information about our hiring process and prepare applicants for success. Attendees will receive information about what to expect during testing and interviews and learn more about our agency. *Registration is first-come, first-served and is open to the first 50 form submissions.

Register for the hiring prep course

Step 2. Register for the written exam

REQUIRED: Select a test date below.

Register for the written exam

REQUIRED: Applicants will take the physical fitness test after passing the written test.

Learn about the physical fitness test

REQUIRED: Applicants will interview with police and community members.

Learn about the background and polygraph process

Candidates are selected by the chief based on their cumulative performance throughout the hiring process and given a conditional offer of employment.

Selected applicants become recruits who are specifically trained to serve the city of Lexington with our department.

Learn about the Training Academy

While related to police work, no prior knowledge of law enforcement is needed. The written test will count 35 percent towards your overall score. The passing score is 65%. Once the written test is complete, each candidate will be immediately graded and given their scores. Candidates will be scheduled for the physical fitness exam by a member of the training academy after successfully passing the written test.

Bench press (video) – This is a test to measure absolute strength. Lower the bar until contact is made with the chest to the 3-inch sponge. Then, from the down position, raise the bar toward the ceiling, until the full, yet soft extension of the elbow is obtained.

Sit-up test (video) – This is a test to measure the abdominal or trunk muscular endurance. While lying on the ground, the candidate will be given one minute to do as many bent-leg sit-ups as possible. Sit-ups are performed until the 11 point threshold is met or until the one-minute time limit is reached.

300-meter run (video) – This is a test to measure anaerobic power or the ability to make an intense burst of effort for a short period or distance. This test consists of sprinting 300 meters in 65 seconds or less. The entire body must cross the finish line.

Push-up test (video) – This is a test to measure muscular endurance. While in the up position, arms fully extended and legs extended so the body forms a straight line. Push-ups are performed until the 11 point threshold is met or until the two-minute time limit is reached.

1.5-mile run (video) – This is a test to measure aerobic power or cardiovascular endurance (the ability to have stamina over time). This test consists of running/walking or any combination as long as the appropriate distance is covered. The entire body must cross the finish line. 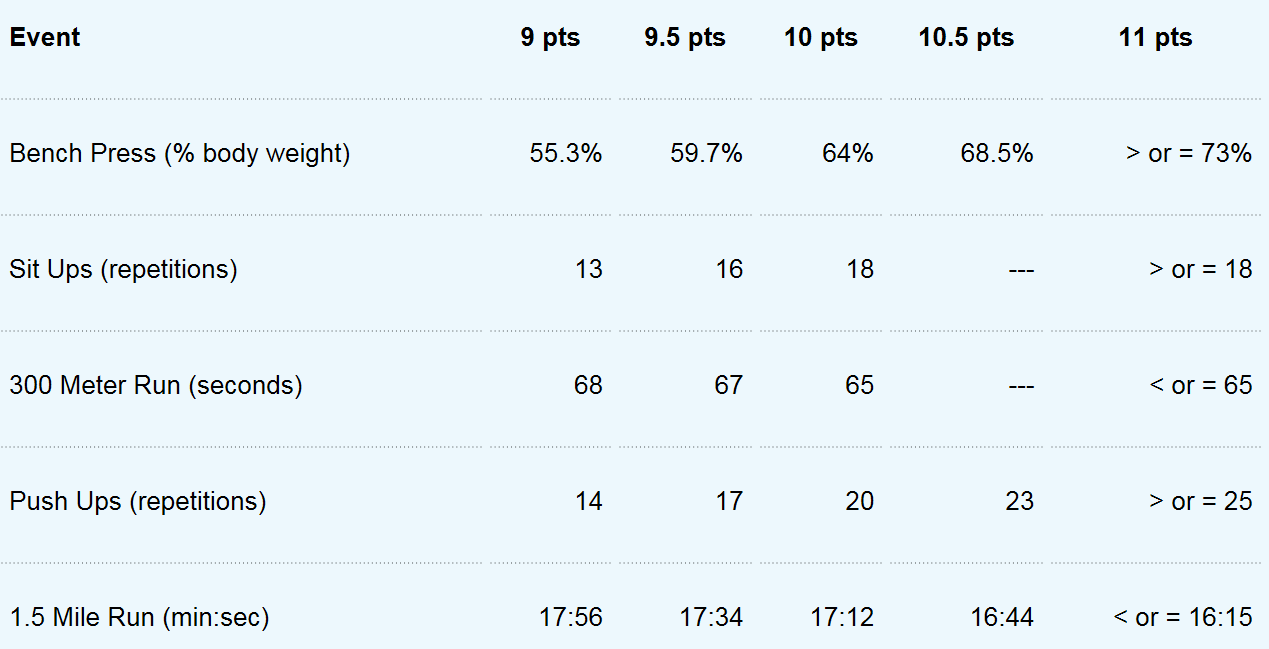 An overall score of 50 total points is required to move forward through the hiring process. A candidate may participate in the physical fitness testing in its entirety up to four times in a one-year period, which shall be calculated from the first date of testing.

Candidates who successfully complete the physical fitness test will be scheduled for an oral interview. The oral interview will consist of questions related to your previous work experience, training and knowledge for successful performance as a police officer. Prior law enforcement experience or a degree in criminal justice are not required!

The oral interview will be weighed at 65% of your overall score in the hiring process. After the oral interview is complete, applicant scores from the written test and oral interview are combined to compute the final score. Applicants will be preliminarily ranked in order based on their combined scores.

The Chief of Police selects a number of applicants who complete the oral interview to move on through the hiring process. These applicants will be scheduled for a pre-polygraph/background interview and polygraph exam.

The Lexington Police Department is an Equal Opportunity Employer.